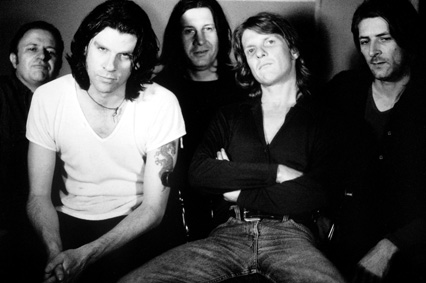 Live offering from the Beasts of Bourbon, Low Life. Recorded Live at The Tote and mixed at Atlantis Studios in August 2005.

Beasts of Bourbon reunite for two (or 3) special shows...

In 1983, The Beasts of Bourbon's drunk-swamp-rock was formed as a side project in Sydney, but they grew to become a supergroup influencing and inspiring a new dangerous form of rock n roll within Australia and garnering praise and respect world wide for their infamous live performance; when they took to the stage, you knew you would get a great show, but what form this took or what direction the evening would go, you never knew.

This quintessential Australian pub rock band fuelled by alcoholic ambiance comprising of Tex Perkins, Spencer P Jones, Tony Pola, Charlie Own and welcoming back, the fully recovered Brian Hooper have reformed for two very special reunion shows, before heading to Spain for the Azkenza Rock Concert, where they will share the stage with Deep Purple, Queens Of The Stone Age, Bad Religion, Wilco, Monster Magnet, Television and many more.

A new recording will soon be available in the form of a live album and has been described as the Beasts at their finest and angriest yet. "Low Life" was recorded at Melbourne's infamous Tote Hotel in late 2003 and is set to be released August 1, through Spooky Records.
Harp Magazine

After listening to the assaulting and careening midtempo sludge-twang of Australia's Beasts of Bourbon on this furnace blast of a live album, you'll have no trouble believing that lead throat Tex Perkins wasn't faking the rather inelegant bathroom-floor sprawl on the album cover. Suffice to say that these masters of sonic grit leave no ear hole unscathed on these dozen killer tracks of anarchic party music--the finest in unclean rock and as authentic as this stuff gets.
By Jeff Monk

THE on-again off-again saga of the Beasts of Bourbon continues with this whisky-soaked live effort. Tex, Spencer and Charlie lurch from sweaty blues to gritty funk and all the way back again. Fittingly the set features the infamous Rolling Stones rarity C---sucker Blues and AC/DC's Ride On. Captures the band in fine form, assaulting a pub audience.
JEFF CRAWFORD - Messenger News

Beasts of Bourbon - 'Low Life, Live at the Tote' 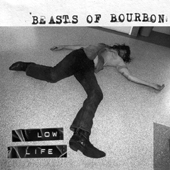