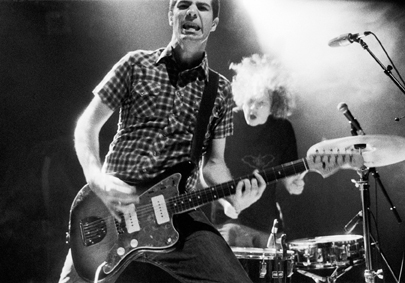 "Sometimes a band comes hurtling outta the primordial ooze with such teeth-gnashing force and insurgent brilliance it knocks you in the chest like some kinda rock'n'roll one inch punch. Oof! Your new rock heroes."

Melbourne's Digger & The Pussycats are one of the city's most exciting exports in years, having built a reputation both locally and internationally as a unique live performance that has to be seen to be believed. Combining a myriad of musical styles ranging from 60's garage-punk right through to blues and party rock and roll, the band has won over audiences in both hemispheres through relentless touring and their prolific catalogue of releases.

After the success of their 2004 debut "Young, Tight & Alright" the boys returned with"Watch Yr Back" a follow-up that was packed with surprises that has been lauded in the press of such far-reaching places as USA, Europe, Japan and even Israel!!!. The common thread between each of the band's recordings is that boundaries are pushed at both ends, with a good mix of melodic-yet-trashy pop songs and hard-hitting punk screamers.

This music has seen the band hit the road in a big way, having toured Europe in each of the past 5 years, amassing close to 200 shows on the continent since their first trip in 2004. With Europe well and truly conquered, the boys were also invited to play at the world's premier garage festival, Gonerfest in Memphis 2007. The festival coincided with a successful 6 week tour of the USA and South Korea.

The first half of 2008 was also busy for the Pussycats, releasing both a new studio album "let's Go To Hospital" and a Europe-only live LP "Bad Reception". Following yet another smash and grab 7 week tour of Europe, the boys kissed each other goodbye for eight months as Andy unsuccessfully tried to join a post-rock band in Glasgow.

Digger and the Pussycats - 'Watch Yr Back' 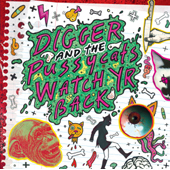 Digger and the Pussycats - 'Young Tight and Alright' 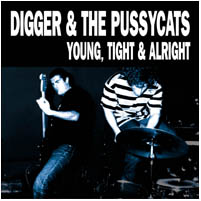