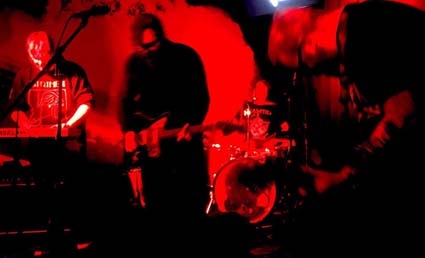 Leaching began life as a sanity project for musician and recording/mastering engineer Steven Smith. Having built a home studio in the first Melbourne lockdown, Smith dived in during subsequent lockdowns and produced an album of fully realised and committed cinematic dark post punk.
The project was originally conceived as an instrumental project inspired by John Carpenter, the Mandy and Bladerunner scores, and the Streets of Rage game soundtrack, but feeling that the material was unfinished without vocals Smith decided to incorporate stream of consciousness lyrics - in some cases improvised and in others edited down from many hundreds of words into their final recorded form.
The recordings are highlighted by a cold 80s production style and employ equipment used by Prince, Kate Bush, and New Order in their seminal works and is drum machine and synth heavy, featuring Smith’s honed melodic-noise guitar stylings and driving bass guitar parts pushing everything along firmly into the abyss. The songs have drawn comparison to goth era The Cure, Joy Division, early New Order, Broadcast, Siouxsie and the Banshees, and Rowland S Howard.
After several musician friends expressed enthusiasm about playing the material, Leaching became a live band, and with new material already being written and recorded are looking to release their debut LP End Themes.