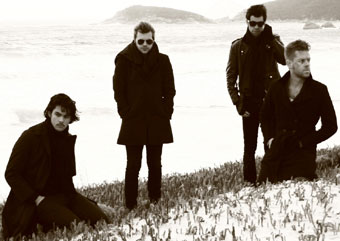 All Hail The Drunken Liar, the debut album for the Melbourne quartet, takes Sailors & Swine's clear affection for country music's blood-soaked narratives and twanging guitars and subsumes them in a bass-heavy post-punk squall not unlike that of The Birthday Party's early years. Opener "Holy Shark" staggers violently into the room and loudly announces the band's intentions with snarled baritone vocals, a kicking groove and jagged, distorted guitar twangs all swinging drunkenly from a bass-line of such commendable filthiness, it almost demands an immediate shower on the part of the listener. The group then proceed to explore their country/post-punk hybrid to full effect, from the darkly poetic and yearning "Miner's Bride", to the vicious, stomping swing of "The Birds" and the unsettling blackened waltz of "Stranger". It's a hybrid that works to surprisingly consistent effect, proving viscerally primal, slyly intelligent and disturbingly sordid all at once, leaving the entirety of All Hail The Drunken Liar suffused with a dark, faintly horrifying, psychedelic atmosphere. It's an atmosphere which will endure as a tantalisingly uncomfortable memory long after the individual songs have concluded and which distinguishes All Hail The Drunken Liar as a very impressive debut.

Sailors and Swine - 'All Hail The Drunken Liar'