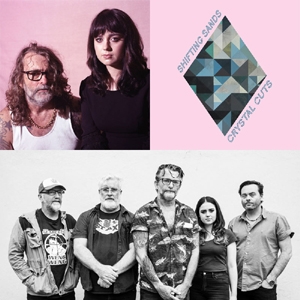 “Crystal Cuts” is a record born of the AM, of the radio wave, of the earliest of mornings spent with a mono ear-piece strung from a transistor or amateur crystal hearing about someone else’s problems, searching for meaning to your own.

Shifting Sands beginning was intentional. Of this there can be no doubt. Though the initial intention still remains a mystery the result from this beginning can only be described as a “happy accident”.
Geoff Corbett (SixFtHick) and Dylan McCormack (Gentle Ben & his Sensitive Side, The Polaroids) glued together words and music as a post-work debrief to take the edge off dealing with life’s little realities of someone else’s problems in a Drug & Alcohol unit in a faraway hospital.
It was never meant to mean anything. But it did.
At the core Corbett and McCormack along with a revolving door of Brisbane’s finest managed to spit out something not heard and not tried on the stage-boards for quite some time, maybe forever ( in northern climes at least). It was tagged down-beat, depresso-core. The Sands were the quietest heaviest band around and still are.
The debut album “Beach Coma” released on Melbourne’s Spooky and France's Beast label garnered critical acclaim on both Australian shores and the European continent, its sound breezing from midnight moonlight shimmer pop to tomb-stoning surf to RSL heartbreakers and back.
That was four years ago.
The interim has seen a shift for Corbett and McCormack and no longer was it someone else’s problem. It became personal.
Death and disease the lingering vibe of unease can be clocked and forgiven. You try and seclude yourself in the song writing corner like you have done before all business as usual and shrug that monkey off. No forgets.
Even if you could forget why would you? Bad times are the Shifting Sands mantle and what presents is a palette to draw from. “Beach Coma” turns out was the entrée of self-fulfilling prophecy, crossing the threshold from anxiety and nihilsm. Though it seems now… the crux…is in flux and it’s weighing heavy.
Enter “Crystal Cuts”, Shifting Sands second long player for the Spooky and Beast labels. Now don’t go getting us wrong. It’s not all deep-sea lows. Under the crush there are gardens and caverns providing light and respite.
Isabella Mellor (Jeremy Neale, Catalano) has well and truly arrived and has stamped her trademark vocal prowess indelibly across “Crystal Cuts”. The saccharine to the nicotine, Isabella brings it by the satchet as she glides along the fence lines all femme feline nonplussed. 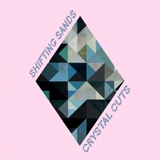